We left early, just before sunrise and aimed for Solomons.  It had been a very quiet night in fishing bay with winds less than 5 knots, but by the time we got to the bay the winds were up over 20 again and the chop was annoying once again.  The problem with heading into 3-4 foot chop is not safety, but comfort and speed.  It seems just when you get the boat up to speed you hit a wave and the boat slows, sometimes to 3 knots, and starts rocking, then you accelerate slowly back up to cruising speed just to have it happen again.  A couple of hours of this is tolerable, but not a day.  Fortunately after about 2-3 hours progress was decent and we made Solomons by 5pm.  Our friend John and Stephanie were still in Solomons working on John’s recent sailboat acquisition so we were able to have dinner with them at CD Cafe, one of our favorite restaurants in Solomons.  We anchored close to Zahnheisers by an empty mooring field and dinghied in for dinner.  Our last night anchored out on this trip was calm and cool.

Well we didn’t get to sail much, and the current was against us the whole trip up the Chesapeake, but we made it.  The winds died, and then switched to the West so we were trying to sail all day.  Then about 2 hours before we got to Fishing Bay the winds came up to over 30 knots on a close reach.  We hit 7.8 knots into 0.5 knots of current and once again the boat is covered in salt spray.  All of that nice rain wash last night was for naught.  The anchorage here is large and fairly well protected.  There are three other boats here rafted up.  Hopefully their anchor set is good.  We will get an early start tomorrow and head for Solomons.  The winds are forecast 10-15 against us, but at least we will have the current with us tomorrow.  Time for a glass of wine! And for entertainment tonight we have a classic Concordia Yawl and the Virginia tall ship Virginia out for an evening stroll. 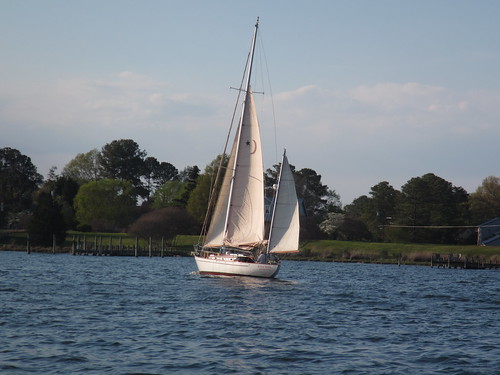 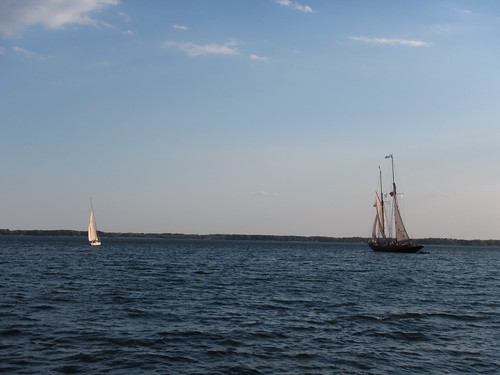 After several very long days, and predicted strong thunderstorms we decided to make it a short day and stop at a marina in Portsmouth.  We left the dock at 0600 to be sure we made it through the plethora of drawbridges between Coinjock and Norfolk.  They open on fixed schedules and are routinely closed for 3 hours around morning and evening rush hours, so there is motivation to finish this stretch before the last bridge closes from 3:30 to 6:30 pm.  We made it easily through the last bridge, the Gilmerton Bridge, by 1:30.  They even opened a few minutes early for us, something that rarely, if ever, happens.  Docking at the Tidewater Yacht Marina in a 20 knot crosswind was a challenge.  We ended up in a different slip than originally suggested, but other than that there was little drama.  Having more time than expected, we went out to grab a bite for lunch and explore Portsmouth.  The town is trying hard to rejuvenate itself and is holding its own and maybe improving a bit from the last time we were here 5 years ago. There are a few storefronts and restaurants that have closed, but the ones that are open are very nice.  We had a good lunch and great beers at the Bier Garden, with 350 beers to choose from.  Then it was off the the Kitchen Koop on High Street for a coffee maker to replace the French press that broke two days ago in the sink.  We ended up buying a Bialetti Moka Express, which it turns out brews a fine pot of coffee.  Almost espresso, and tastier than the French press.  It is also all metal, so it should survive the rigors of living on a sailboat.  There was a tornado watch, and severe thunderstorm watch here last night, but the worst of it passed just south of us with a couple of tornados in Elizabeth City, NC and lots of lightning in the distance.  Lots of wind and rain, but no damage where we were.  We slept in and left the slip around 8:30 and started the final sprint up the bay.  We tried to sail as we came out of Norfolk with gusts to 20 knots on a close reach, but the wind has died and we are motoring once again.  The wind is predicted to go West this afternoon, so maybe we will be able to sail a little more.

The days since Wrightsville Beach have been long, 90+ mile slogs, but the weather has cooperated even if the current hasn’t.  We found a beautiful protected anchorage in Slade Creek near Bellhaven.  Pulling in the winds dropped from 20 to less than 10 and the creek was perfectly flat.  Surprisingly, we were the only boat there.  We had hoped to make it to Bellhaven early enough to enjoy dinner with our friends Richard and Janet, but it was not to be.  The following day we moved on through the Pungo Canal, where there is absolutely no cell phone coverage without an external amplifier. Then an easy trip up the Alligator River, thru the Alligator River Swing Bridge (which has been broken recently) and then across the Albemarle Sound.  The sound is shallow and wide and can be very unpleasant, if not dangerous in strong winds, but the day was perfect for the crossing and we made decent time.  We stopped at the Coinjock Marina long dock where we picked up plenty of fuel for the trip to Annapolis and beyond.  We also had the traditional prime rib dinner at the restaurant.  Last fall when we ate here with Joe and Peggy the prime rib was a dissapointment, but not this time.  A good dinner with ample leftovers for another night.

We left the Wacha Wachee Marina with every intention of pressing on but when we got to Southport and looked ahead at the cold and gloom, we decided to stay. The arts festival in town, our good friends who took us on a town tour, Easter service and watching the movie Safe Haven which was filmed in Southport were some of the highlights of our stay. The winds were strong and a lot of rain fell but it was easy to get off the boat and wander around town. We left Easter Monday with hopes of making lots of miles but the Cape Fear River current quickly put us behind. So we pulled into Wrightsville Beach anchorage with hope for tomorrow.

We left Beaufort with the possible intention of stopping at Charleston but there wasn’t room on the megadock so we continued on. After a night at anchor, we headed for the Wacha Wachee Marina. The restaurant overlooking the marina was full of twinkly lights, the music was playing and the tables were full of folks.  It was a very lively scene. The next day we headed for Brookgreen Gardens before the bad weather hit. The garden is 9,000 acres filled with American sculptures, supposedly the largest sculpture garden in the world. 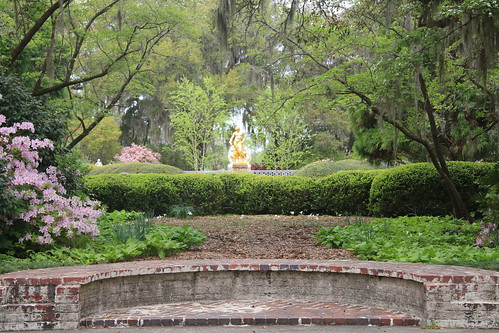 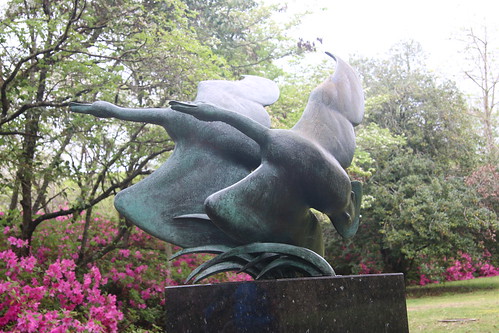 It also includes old rice fields, a quite effective audiowalk about plantation life for the slaves and various bird and animal displays. We spent Monday and Wednesday at the gardens. Tuesday was windy and rainy so we went car shopping, instead.

We left Jekyll Marina bumping along the bottom at low tide and wondering how many more low spots we would find. We motored a long day through the marshes and ended up on the north side of St. Catherine’s Inlet. When we looked at the route that night, we discovered that jumping out into the ocean might shorten the trip, miss several opening bridges and a number of low spots. So the next morning we rode the tide south to the Inlet and then sailed/motored up to the Port Royal sound. We came in the sound and motored north to Beaufort, S.C. in good time.  It was a very relaxing day. We stayed an extra day in Beaufort and met some friends for dinner.

We left Jekyll Harbor Marina at 7:30 AM to get thru some shallow spots before the tide falls too far.  Getting off the dock with an wind holding us on and parallel parked tightly between two other boats was a challenge, but we made it with inches to spare.  The concern over shallow water in Jekyll Creek was well founded, but we managed to plow through about a foot of mud in one spot and escaped.  It was a nice quiet day and we made good time and dropped the hook in Big Tom Creek.  After reviewing the weather forecast and looking at the state of tides and the shallow spots on the ICW for tomorrow we have decided to head off shore for the trip to Beaufort.  It saves us a few miles and lots of worries.  Offshore we just set the autopilot and keep a lookout for other boats, and there aren’t many.  We should be in Beaufort, SC by dinner time.

We moved on to Jekyll Island a day early to have a nice farewell dinner with Joe and Peggy from Onward.  They are moving North more quickly than us so this is where they depart.  We did have a lovely dinner at the Jekyll Island Club, even wearing long pants and a collared shirt.  We will remain to explore the Turtle Rescue Center, do some biking, shopping, laundry, boat washing and top off the fuel and water.  We will leave Wednesday morning and see where we get to.

After a nice long stay in Hopetown on Elbow Cay, we left to go thru the Whale Cay Passage and start towards home.  We spent on night on the hook at Allans Pensacola Cay in the NE Abacos and explored the island by dinghy and on foot.  Wednesday morning we left before dawn for the 330nm journey to Georgia.  It turned out the weather was great, but not quite enough wind so we motor sailed more than half of the trip.  The gulf stream was calm and we hit 10 knots sailing, which was great but not fast enough to arrive Thursday night and too fast to arrive after dawn on Friday.  So we slowed down and arrived just before dawn.  We hooked a beautiful Mahi, but it escaped the gaf and broke the line after we had it out of the water and almost on deck.  Arriving in Fernandina Beach we phoned the US Customs and Border Patrol using our Local Boaters Option number and in 5 minutes over the phone we were legally in the US so we lowered our quarantine flag and moved on to anchor at Cumberland Island, GA.  We will be here a couple of days before moving on to Jekyll Island for a stay at their marina.  That means free water to wash the boat, long showers, and laundry.  Of course we will enjoy the local culture on Jekyll too!  We will see what the weather holds for us after that and will be moving up the coast at a good pace.